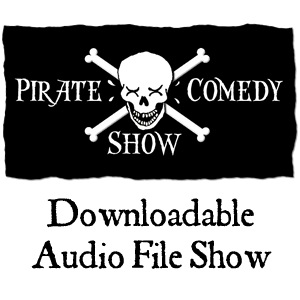 When not performing at Midwest Renaissance Festivals and Faires, the Pirate Comedy Show will be wasting bandwidth with silly podcasts featuring their music and attempted comedy. (We are currently busy with non-podcast projects, but episodes will resume as soon as we have some time! Come see us in person, instead ;-)

Another Crappy Podcast got a short interview on the Leo Laporte TWiT Live video show at the New Media Expo in Las Vegas today. Special thanks to Steve Bjork for making it happen.

A short story submitted by our friend, Troy Rutter, of www.ruttersramblings.com (he's the Sheriff at our real home renaissance festival). Thanks, Troy!

In an attempt to post our shortest show ever, we fail miserably.

A short episode thanking some of our youngest fans, who no doubt only get to listen to edited excerpts of this show (or our album, as the case may be, and is). Thanks, Fisher School kinders!

Trixie gets her own show! Sorta. If you'd like to talk to Trixie (or at least leave her a message), call 206-20-30-227 and maybe we'll let her answer your calls in a future episode. Maybe.

Entertaining renaissance festival, county fair and shopping mall audiences since 2003… Amusing worldwide internet listeners since 2005. Not producing any new shows since July 2006… It’s… The Pirate Comedy Show! Stay tuned as we begin a brand new season of piratey fun and festivities featuring the continuing adventures of Captain J.P. Boyd, legendary pirate, and Molly Mayrose, the wench with the cleavage you love to listen to. In the meantime, buy their CD. pirate comedy show dot com. Or...

(No, not a real episode. Just a quick post to let folks know we are still here! We've just been busy.) Molly and J.P. venture out to the local movie theater to watch the new pirate movie.

It's time for another episode of Listener Mail with Molly. And Trixie. And JP.

A short discussion on how the Pirate Comedy Show was started. Nothing to hear here. Move along.

A letter from a dragon.

Love is in the air at the Grand Scale Renaissance Festival and Fantasy Faire.

Molly strikes back, and we countdown the top 5 most sold Pirate Comedy Show songs from iTunes and other online stores.

Molly goes AWOL and our announcer gets a name.

A podcast about nothing. Hey, it worked for Seinfeld.

We're back after sleeping through Thanksgiving, Christmas and New Years. Did you miss up? If so, aim better.

Hear how we spent out Halloween vacation - working at a local "Halloween Hayride" attraction adding a bit of Pirate Comedy Show flair to their "Time Pirates" adventure.

This is not a show. It's an attempt to post something quickly after having our promo played during the iTunes Podfinder show (XI) the other day. Real show soon, honest! And it won't be like this...!

DESCRIPTION
When not performing at Midwest Renaissance Festivals and Faires, the Pirate Comedy Show will be wasting bandwidth with silly podcasts featuring their music and attempted comedy. (We are currently busy with non-podcast projects, but episodes will resume as soon as we have some time! Come see us in person, instead ;-)

Archived from iTunes at https://itunes.apple.com/us/podcast/pirate-comedy-show-downloadable-audio-file-show/id81005357. Items in this collection are restricted.
ACTIVITY